It was another quiet week for the auction market in Brisbane, with just 51 properties going to market at the weekend. The reported clearance rate was 34 per cent, down three points year on year.

A five-bedroom, two-bathroom Queenslander on a spacious 923-square-metre block at 21 Brook Street, South Brisbane, was sold under the hammer in a marathon auction. Some 75 people piled onto the property to watch seven registered bidders battle it out.

Luke O’Kelly, principal of Ray White West End, said there was considerable interest in the house, with more than 50 groups through during the four-week campaign. He said the interested parties could be neatly split into two groups.

“It was either families wanting to buy it to be in the 4101 state school postcode for [Brisbane State High School], or it was developers and renovators looking to split the block or renovate the house and turn it into something grand,” he said.

“When it came down to it between the two bidders, one was a family and one was a developer. The developer won it. They were absolutely stoked with it.”

O’Kelly said the reasons people were interested in the property were just as consistent as the interest itself.

“Getting 900 square metres so close to the city is really tough,” he said. “Most of the time we’re selling 405-square-metre or 600-square-metre blocks. It’s a bit of an unusual-style property, so we thought we’d get quite a few bidders.

“Not a lot of houses sell in that postcode, so whenever there is a house that comes up it always gets a lot of attention particularly when it is in a good spot.”

The vendor is an overseas family who purchased the property many years ago as a base for their kids who have now moved on. They were very happy with the result.

Meanwhile, the four-bedroom, two-bathroom house on 779 square metres at 7 Tantanoola Street, Parkinson, in Brisbane’s outer-south sold under the hammer. After a 25-day campaign, which had about 30 inspections and five offers, the pristine modern home was put to auction.

About 40 people watched as six registered bidders fought for the property. The auction began at noon, and after just 20 minutes the house was sold for $655,000.

“The owners found their dream home on acreage and put a contract on it subject to sale of their home,” selling agent Sean Johansson, of Harcourts Results Calamvale, said. “They really did not want to lose the purchase, so the sale was paramount and auction presented the best case for them.”

“It was a textbook auction. Seamless from start to finish, essentially highlighting that people will make themselves and funds available for good quality stock where [they] believe the owners are realistic about selling.”

The buyer was a local couple who intend to live in the house.

On the other side of the city, the house at 129 Towers Street, Ascot, on Brisbane’s north side, sold at auction for $1.42 million. The two-level five-bedroom, three-bathroom home was rebuilt 10 years ago, and features a terrace balcony, stained glass and french doors.

Some 50 people watched on as four registered bidders attempted to lay claim to the sophisticated house. The first bid was $1.35 million, and was cast by buyer’s agent Wendy Russell, representing a Sydney-based client.

After a lengthy 45-minute auction, the house was sold to buyers who were looking to land a home in the Ascot State School catchment area.

Elsewhere, the house at 4 Berkshire Place, Heathwood, in Brisbane’s south-west sold under the hammer for $500,000. In Mount Gravatt East, the property at 37 Crest Street sold at auction for $901,000 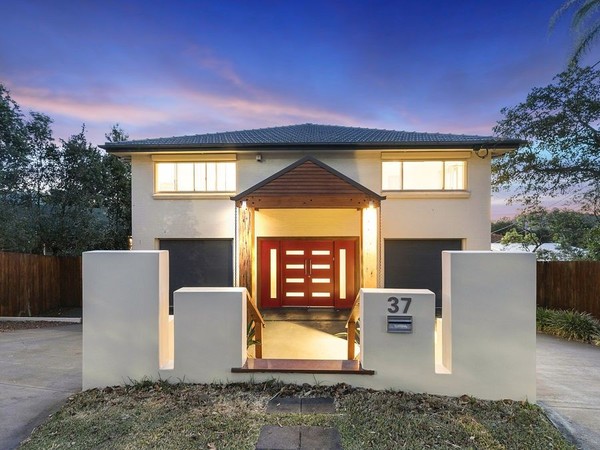