What’s different about this property boom?

If not for the backdrop of a global pandemic, you could be forgiven for feeling a sense of déjà vu as the property market shows all the signs of launching into yet another boom.

Auction clearance rates are at near-record highs, bankers are rubbing their hands together as lending takes off and many economists are predicting double-digit percentage gains in house prices over the next two years.

Latest quarterly figures from CoreLogic, when annualised, imply the national property market is growing at 11.2 per cent a year.

However, there are some big differences between the latest price upswing and previous booms in Australian bricks and mortar.

A glaring distinction is the market is overwhelmingly being driven by owner-occupier homebuyers, rather than investors, who turbo-charged the property surge of the past decade.

CoreLogic’s Tim Lawless says at the peak in 2015, property investors made up about 46 per cent of all new mortgage lending. Today, investors account for just 23 per cent.

Lawless says possible reasons could be banks’ tighter credit polices around interest-only lending, and softer conditions in the apartment market that many investors favour.

“I wouldn’t say we’ve seen [investors] come back into the market yet, but conditions are looking like that’s a possibility, I think,” King said.

Another unusual feature of the latest property boom is that it is occurring amidst the slowest population growth since the First World War – something that you might expect to detract from housing demand. 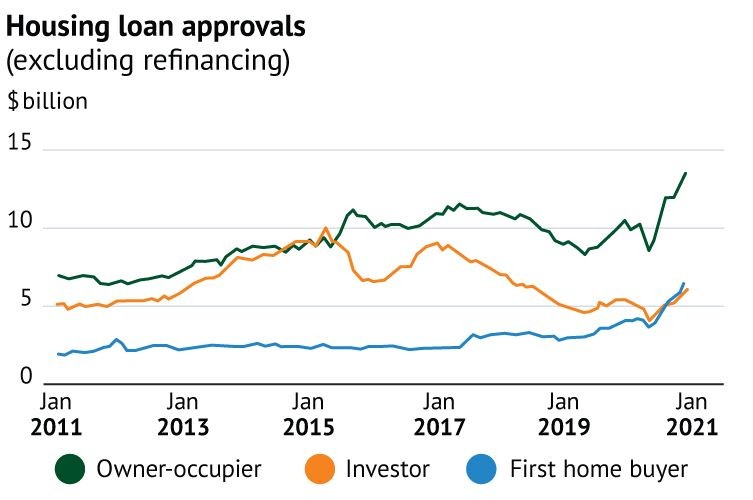 What’s more, Mortgage Choice chief executive Susan Mitchell points out that the uncertainty of COVID-19 is likely to continue to hang over the market for months, as emergency financial assistance from banks and the federal government is withdrawn.

The mortgage broker’s half-year result also underlined another peculiarity of these times: while new loan growth is strong, there are also many customers repaying outstanding debt at a cracking pace.

So, if the property market is not being fuelled by investors or population growth, and coronavirus uncertainty lingers, what is driving prices higher?

All the evidence points to an owner-occupier bonanza. Australian Bureau of Statistics figures show new loan approvals to owner-occupiers surged 39 per cent in the year to December, while loan approvals for first-home buyers leapt by 61 per cent, boosted by government grants.

The surge is also a response to rock-bottom mortgage interest rates; when combined with a low supply of homes for sale, the result is strong price growth.

There is also a self-fulfilling dynamic at play in which people tend to jump into the market when they see prices going up, thereby drawing in more buyers. The phenomenon, known as “fear of missing out,” or FOMO, could further exacerbate price growth.

Experts say the unusual conditions suggest there is a divergent ongoing outlook for property – as opposed to yet another long-running boom.

Lawless is tipping national house price gains of 7-10 per cent but expects Sydney and Melbourne prices would be tempered to a degree by limits of affordability and their greater exposure to overseas immigration.

“I don’t think the market is fragile or is going to go backwards, but it’s hard to see housing values rising as quickly into next year,” Lawless says.

If FOMO catches fire and the boom starts to accelerate, the Reserve Bank of Australia (RBA) has made it clear that regulators would likely step in dampen the market. But for now, this looks unlikely.

RBA governor Philip Lowe this month said his main concern was “risky” lending from banks, not changes in house prices, but so far there had been few signs of a deterioration in lending standards.

If I am considering selling, why go to market now?